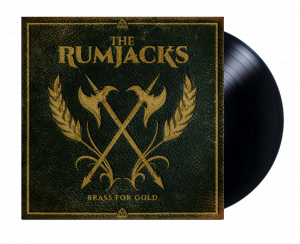 In March 2021, The Rumjacks released their fifth studio album ‘Hestia’, rejuvenating the bands collaborative spirit, and marking an explosive new era of energy and creative release.

Hestia introduced new singer and songwriter Mike Rivkees on lead vocals, heralding a refreshing evolution for the band that connected fans old and new. The album was an unmitigated success, both critically and artistically, and signified a fresh page in the story of The Rumjacks.

Invigorated by the release of Hestia, The Rumjacks quickly went back into the studio to record ‘Brass for Gold’ EP, capitalising off their new sense of artistry.

“After the amazing response we had from Hestia’s release, we knew we had to back it up, do it justice and show we aren’t messing around with any of this,” Bassist Johnny McKelvey said.

“I guess while COVID ‘slowed everyone down‘ it just made us want to work harder, record more music, plan and think ahead to when all this mess ended that would be ahead in every way”

The resulting EP a clear representation of a band finding a new voice and making sure that voice is heard as loud as possible. Grounded by the eclectic Celtic punk sound that The Rumjacks have become synonymous with, ‘Brass for Gold’ sees the band dig deeper into their ska and hard rock influences, all the while holding onto the defiant energy that ignites their sound.

While ‘Hestia’ had the band conquering a global pandemic in order to record, ‘Brass for Gold’ saw the boys united in person for the first time. Producing a sound that is seamless and cohesive.

“Brass for Gold is as much as an EP can possibly offer and still be called an EP. In true Rumjacker fashion, these songs represent a variety of different stories. The topics range from lovesick nostalgia, to misfortunate war heroes, and a few lighthearted drinking songs for good measure,” Rivkees said.

“While some EP’s tend to be quite experimental, Brass for Gold represents a solid continuation of the newly reformed Rumjacks. Once again stating (almost literally in some of the lyrics) we are passionate and dedicated songwriters.”

From the raucous comradery of first single ‘One For The Road’ to the crashing crescendo of ‘Blinding Flashes’ to the confident sentimentality of ‘Falling Back’, the cumulative energy of ‘Brass For Gold’ sees the band communicate one thing loud and clear.

First single is One for the Road, a traditional sounding belter with the energy you’d expect from this new era of The Rumjacks.

The song is a story of an escaped prisoner in the 1920’s riding the rails until he reaches the pacific ocean and starts a new life in California. For anyone escaping frigid winters and soul draining work conditions the lyrics would still relate to our protagonist’s contemporary counterparts, “With all the phony friends you’re makin’ and the smiles that you’re fakin’- it beats the life you left back in the snow.”

One for The Road (single) is out now!

PrevPreviousBad Religion 40 (+2) Tour Support Just Announced!
Next2022 The Year That Keeps on Giving!Next

If 2022 were to be a biblical metaphor, then surely it’s the

European friends, here it is at long last! After, contagious bats, hiccups and false starts